Our fortnightly update on COVID-19 in the Pacific
Health | The Pacific
29 July 2021
Papua New Guinea and Fiji are facing large budget deficits in the wake of COVID-19, while Australia is set to surpass one million vaccines delivered to the Pacific, Hugh McClure writes.

There are now more than 17,000 active COVID-19 cases in isolation in Fiji, after the country recorded its worst day of the pandemic to-date, with 1,285 new cases recorded in the 24 hours to 8am on 26 July. In total, 24,424 cases and 195 deaths have now been recorded in Fiji, with Central Division continuing to account for the majority of cases.
Elsewhere in the Pacific, case numbers are again rising in French Polynesia and Papua New Guinea (PNG). French Polynesia recorded 107 new cases over the weekend of 24-25 July, and has now recorded 19,392 cases and 146 deaths. There have been 17,655 known cases and 192 deaths in PNG.
Further north, Guam has recorded 8,237 total cases and 143 deaths, while New Caledonia has recorded 133 cases.
No new cases have been recorded in Wallis and Futuna, Solomon Islands, Marshall Islands, Vanuatu, or Samoa. American Samoa, Cook Islands, Kiribati, Federated States of Micronesia (FSM), Nauru, Niue, Palau, Tokelau, Toga, and Tuvalu all remain virus-free.
Here is a snapshot of policy responses to COVID-19 in the Pacific region, correct as of 12pm AEST, 28 July 2021.
T 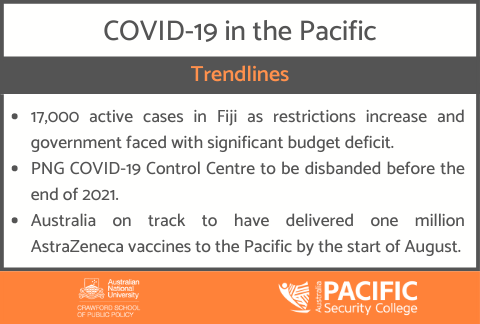 he fortnight in review
More than 4,000 COVID-19 positive people have been turned away from hospitals in Fiji due to a lack of beds.
The health ministry has said that it continues to support people through at-home packages, including through food and medical deliveries.
40 per cent of pregnant women have been testing positive to the virus. Experts have said that assistance from donors, such as Australia and New Zealand, should focus on on-the-ground, hands-on assistance, rather than personal protective equipment, due to critical staffing shortfalls in Fiji.
Since 26 July, additional restrictions have come into force in Fiji. The curfew has been increased to 6pm-4am, with all unnecessary movements to stop. Travel off Viti Levu will be assessed on a case-by-case basis. Business groups in Western Division, including the Nadi Chamber of Commerce, have called for a nationwide lockdown.
The Fiji Government handed down its budget this fortnight. The government will rely on loans for 45 per cent of expenditure, with the deficit, driven by revenue shortfalls, estimated at $1.045 billion. Budget figures have relied on fully vaccinating 80 per cent of the population by 31 October. In response to Prime Minister Bainimarama’s ‘no jab, no job’ policy, the opposition leader said that vaccination should not be a prerequisite for government assistance.
Analysis of the PNG Government’s budget has revealed its largest budget deficit in history, with revenues falling 14 per cent below what had been budgeted for. Government revenue has dropped to 15 per cent of gross domestic product – the lowest level since independence. In other economic news, Bougainville businesses say they continue to suffer, due to the border closure with Solomon Islands.
PNG’s police-led COVID-19 Control Centre will be disbanded before the end of the year. Prime Minister Marape has said that as the pandemic continues, COVID-19 management will be entrenched into national health policy-making frameworks.
A mobile vaccination program has commenced operations in Port Moresby, with clinics in several of the city’s districts. This comes after analysis revealed that the majority of people attending the Rita Flynn vaccination hub were corporate employees, with vaccination rates among the unemployed and informally employed particularly low. 4,000 Sinopharm vaccines have been administered to date in PNG, with the majority being offered to Chinese expatriates.
A PNG Police Commander has warned about the border risk with Indonesia, saying people are still crossing the border, while in West Papua hospitals are at full capacity.
Authorities have begun administering Moderna vaccines to pregnant women in Fiji, after the first shipment of 150,000 doses arrived, funded by the United States and COVID-19 Vaccines Global Access. Prime Minister Bainimarama has called on over 60s to come forward for vaccination, after it was revealed that seniors reported the greatest vaccine hesitancy.
Australia looks set to pass a major milestone this week, with one million AstraZeneca vaccines now delivered to the Pacific region, and 560,000 of that allocation going to Fiji alone. Australia’s Minister for International Development and the Pacific Zed Seselja said that assisting the Pacific is prudent for Australia, stating Australia’s relationships with the region are essential for national security.
The announcement comes as diplomatic tensions over vaccine provisions between Australia and China have made international headlines. New Zealand is now looking to begin delivering vaccines to Fiji, with 500,000 doses of AstraZeneca and Moderna slated to arrive from August. Australia has offered one million additional AstraZeneca doses to Solomon Islands, with 50,000 expected to arrive on 30 July.
French President Macron has used his first visit to French Polynesia to encourage locals to get vaccinated. His calls came as 300 local residents rallied against France’s ‘health pass’, which will govern access to public spaces including cinemas, museums, and swimming pools. French Polynesian President Edouard Fritch has expressed support for mandatory vaccinations, and set a goal of 70 per cent vaccine coverage by September.
A shipment of Pfizer vaccines have now arrived in Tokelau, meaning that the rollout has commenced in all three of New Zealand’s ‘realm’ countries.
Preparations are underway in Samoa for a return of New Zealand tourists through a travel bubble by Christmas. Samoa’s health ministry is aiming for 90 per cent vaccination before borders re-open.
B

riefly, this fortnight UN Women launched a COVID-19 risk reduction drive targeted at PNG’s markets. An exiled leader of the West Papuan Liberation Movement called on Australia, New Zealand, the United States and the United Kingdom to begin directly supplying vaccines to West Papua, amid concerns of rising infections in the Indonesian-controlled provinces. Debt relief has been high on the agenda of the Pacific Island Forum’s Economic Ministers Meeting this week. The Australian High Commission in Vanuatu has provided funds for the Rainbow Disability Theatre Group to travel the country to raise COVID-19 awareness. Prime Minister Sogavare has expressed his concern for Solomon Islands students in Fiji as the situation there deteriorates. Finally, in the midst of the pandemic, spirits have been buoyed in Fiji, as the Fiji rugby sevens team defeated New Zealand to take home a gold medal at the Tokyo Olympics this week.
Comments are closed.
Hugh McClure is the Research Officer at the Australia Pacific Security College (PSC).
See All
Press Ctrl+C to copy