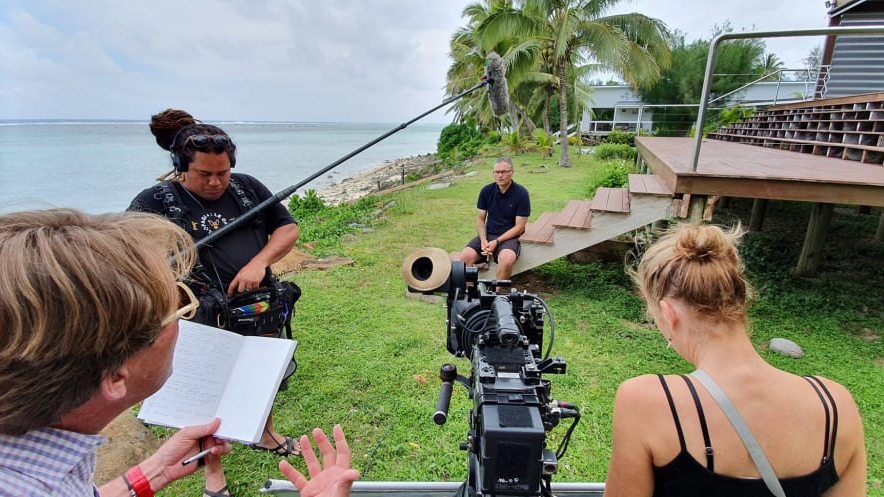 William Cuthers, seated, during the filming of Coastwatchers Operation Pacific. Picture: Aotearoa Media Collective/22092207
Cook Islander William Kainana Anguna, Cuthers as he is known in Rarotonga, is the grandson of one of the Coastwatchers, also named William, who played as a radio operator in World War II.
“I’m really happy that our country and other Pacific countries are mentioned in relation to the Coastwatchers narrative. It is historic,” said Kainana Anguna from New Zealand.
Years ago, he had researched the role of his grandfather and had called for recognition from the New Zealand Defence Force.
In 2020, the names of 14 Cook Islands Coastwatchers who served in World War II were added to the Auckland War Memorial Museum’s online cenotaph.
Kainana Anguna was still waiting for the New Zealand Government and Defence Force to acknowledge the bravery of Cook Islands and other Pacific Coastwatchers and pressed on.
The Coast Watch Organisation, also known as Combined Field Intelligence Service or Section C, Allied Intelligence Bureau, were stationed on remote Pacific Islands to observe enemy movements and rescue stranded Allied personnel.
Most were assigned to Suwarrow (then Suvarov), an island in the northern group of the Cook Islands.
New Zealand decided to attest all men engaged in these radio operator duties across the Pacific as army servicemen – all men, that is, except Cook Islanders and others of Pacific heritage.
This exclusion sent Kainana Anguna on a mission back to Rarotonga to film a documentary, which screened on Anzac Day 2020 in New Zealand.
Kainana Anguna had never stopped seeking formal recognition for the Coastwatchers by the New Zealand Government and Defence Force and is pleased the national remembrance is in honour of all who served in the Pacific.
The commemoration is an important opportunity to remember those who lost their lives and honour the many others who put their lives at risk serving as Coastwatchers during the Second World War, said Glenis Philip-Barbara, Pou Mataaho o Te Hua Deputy Chief Executive Delivery at Manatū Taonga Ministry for Culture and Heritage.
“This year, 15 October marks 80 years since seventeen New Zealand Coastwatchers and five European civilians were captured in the Gilbert Islands and executed at Betio, Tarawa.
“Spread throughout Te-Moana-Nui-a-Kiwa, Coastwatchers were our first line of defence. Tasked with keeping a 24-hour watch for enemy ships – the Coastwatchers were a vital link in the intelligence chain.
“Coastwatchers included a mixture of New Zealand service personnel and civilians, and indigenous Pacific Island civilians. They faced challenges of isolation, boredom and a very real risk of capture and death,” said Philip-Barbara.
Stations were established throughout New Zealand, including the Chatham Islands and the Kermadecs. They extended south into the sub-Antarctic Campbell and Auckland islands, and north to Samoa, Tonga, Fiji, the Cook Islands, Tokelau, Pitcairn, Norfolk islands, Tabuaeran (then Fanning Island) and Kiribati and Tuvalu (then the Gilbert and Ellice Islands), Philip-Barbara noted.
By 1942, New Zealand had 120 coast watching stations including 14 across the Cook Islands group, primarily manned by Cook Islanders.
Families of the Coastwatchers and members of the public are invited to join the event starting at 11am to acknowledge all Coastwatchers who stood fast across the Pacific and its coastlines to protect both their families and homes.
You must be logged in to post a comment.